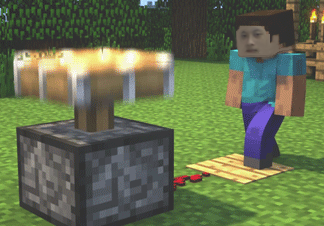 ~W~ represents the width of the grid, and

The following is a valid circuit sample:

In the sample, the redstone dust (#) connects the button (B) and the lamp (L) together, therefore completing the circuit.

Note that a button can directly power a lamp if it is directly beside it, therefore

is considered to be a working circuit.

The first line of input will contain an integer

~(1 \le N \le 50)~, denoting the number of circuits that Jonathan Sumabat wants you to look at.

~W~ represents the width of the grid, and

~L~ represents the length. These integers are followed by a

~L~ grid consisting of exactly one button (B), one lamp (L), and a whole lot of Redstone Dust (#) and emptiness (.). Every single test case will be separated by a newline.

For each case, output on a new line whether Jonathan Sumabat's circuit will function. If the lamp is successfully turned on, output YES. If no, output NO.

In the first circuit, the Z-shaped Redstone path connects the button (at the top left of the grid) and the lamp (at the bottom right of the grid), completing the circuit.

In the second circuit, there is no Redstone Dust connecting the button and the lamp, and since they are not directly adjacent to one another, the lamp will not turn on.

In the third circuit, there is one unit of Redstone Dust connecting the button and the lamp, completing the circuit.

There are no comments at the moment.